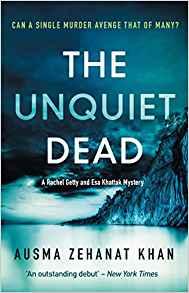 Published on 27th July 2017 by No Exit Press. My thanks to the publisher and Anne Cater for the review copy and having me on the blog tour.


One man is dead.
But thousands were his victims.
Can a single murder avenge that of many?
Scarborough Bluffs, Toronto: the body of Christopher Drayton is found at the foot of the cliffs. Muslim Detective Esa Khattak, head of the Community Policing Unit, and his partner Rachel Getty are called in to investigate. As the secrets of Drayton s role in the 1995 Srebrenica genocide of Bosnian Muslims surface, the harrowing significance of his death makes it difficult to remain objective. In a community haunted by the atrocities of war, anyone could be a suspect. And when the victim is a man with so many deaths to his name, could it be that justice has at long last been served?
In this important debut novel, Ausma Zehanat Khan has written a compelling and provocative mystery exploring the complexities of identity, loss, and redemption.
My Thoughts:

The Unquiet Dead is the debut novel of Ausma Zehanat Khan. It is a crime novel but it is also a mystery novel. It is packed full of research and information about the Bosnian War, a subject I am ashamed to admit that I know little about.

Set in Canada, Detective Esa Khattack and Rachel Getty are investigating the death of Christopher Drayton. It soon becomes clear that all is not as it seems when evidence suggests that Drayton is a War Criminal.

Detective Esa Khattack is a muslim and it was refreshing to read about a central character particularly a Detective that was Muslim. He was by far my favourite character in this book.

The Author writes with great style and I was entranced throughout, I would love to hear more from Khattack and Getty in the future.

Due to the subject matter The Unquiet Dead is not an easy read, but nonetheless it is an important one. As a reader I was left richly rewarded and I was left with much to think about.

Whilst based around historical matters, some of which are horrific and deeply moving, this book is also made current by the fine and eloquent writing of this author.

I feel that I have stepped outside of what would be my usual type of genre and took a leap of faith by reading this one. However I am the one that has been left all the better for reading this remarkable debut.

Thank you to the Author for making me open my eyes, my mind and my heart.

Ausma Zehanat Khan is the author of The Unquiet Dead which won the Barry Award, the Arthur Ellis Award and the Romantic Times Reviewers Choice Award for Best First Novel.

A frequent lecturer and commentator, Ms. Khan holds a Ph.D. in International Human Rights Law with a research specialization in military intervention and war crimes in the Balkans. Ms. Khan completed her LL.B. and LL.M. at the University of Ottawa, and her B.A. in English Literature & Sociology at the University of Toronto.
Formerly, she served as Editor in Chief of Muslim Girl magazine. The first magazine to address a target audience of young Muslim women, Muslim Girlre-shaped the conversation about Muslim women in North America. The magazine was the subject of two documentaries, and hundreds of national and international profiles and interviews, including CNN International, Current TV, and Al Jazeera "Everywoman".
Ausma Zehanat Khan practiced immigration law in Toronto and has taught international human rights law at Northwestern University, as well as human rights and business law at York University. She is a long-time community activist and writer, and currently lives in Colorado with her husband.
You can find the Author on Twitter: @AusmaZehanat

Please do have a look at the other stops on the blog tour. 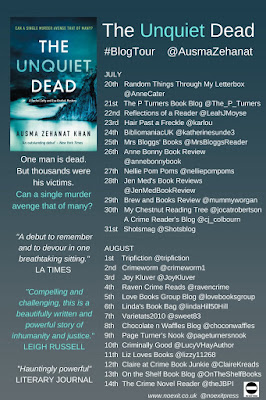