Well, Hello! It has been a while. I had to step away for a while to deal with some health issues. It has transpired that these are not going to go away, and besides I missed it here. Since the last time I posted I have just been randomly selecting books from my shelves. The first one I want to talk about is The Unlikely Pilgrimage of Harold Fry by Rachel Joyce which was originally published by Black Swan in 2013. 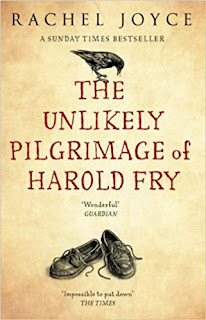 When Harold Fry nips out one morning to post a letter, leaving his wife hoovering upstairs, he has no idea that he is about to walk from one end of the country to the other. He has no hiking boots or map, let alone a compass, waterproof or mobile phone. All he knows is that he must keep walking. To save someone else's life.

I can't remember where I bought this book or indeed who recommended it to me but I am pleased to have read it and I got through it in one sitting which is something of a rarity at the moment.

Harold Fry is retired. He is seemingly unhappy and is constantly nagged by his wife Maureen. Things seem turbulent on the surface but there is an element of mystery as to what bubbles beneath the surface of their relationship. Harold can't seem to do anything right.

When he receives word that an ex colleague Queenie Hennessy is dying and in a hospice he doesn't know what to do with himself. He knows he has to say goodbye and perhaps makes amends for something, but what?

Harold sets off to walk to the Post Box to send Queenie a goodbye letter, only he can't stop walking and what ensues is a poignant walk the length of the country to reach Queenie in time to see her once more. You see Harold believes if he keeps walking then Queenie will keep living and besides Harold owes Queenie big time.

This is a book that deals with loss and relationships, families and forgiveness. An exploration of what happens to the people that are left behind after a death.

There are parts of this book that I found a little irritating. The hangers-on that Harold seemed to pick up and the whole media storm that surrounded him. I also felt that the ending seemed a little abrupt, but perhaps that mirrors the finality of loss.

On the whole I found this book hugely entertaining, particularly moving and I am going to ensure that I now read The Love Song of Miss Queenie Hennessy.

Rachel Joyce is the author of the Sunday Times and international bestsellers The Unlikely Pilgrimage of Harold Fry, Perfect, The Love Song of Miss Queenie Hennessy, The Music Shop and a collection of interlinked short stories, A Snow Garden & Other Stories. Her books have been translated into thirty-six languages and two are in development for film.The Unlikely Pilgrimage of Harold Fry was shortlisted for the Commonwealth Book prize and longlisted for the Man Booker Prize. Rachel was awarded the Specsavers National Book Awards ‘New Writer of the Year’ in December 2012 and shortlisted for the ‘UK Author of the Year’ 2014.Rachel has also written over twenty original afternoon plays and adaptations of the classics for BBC Radio 4, including all the Bronte novels. She moved to writing after a long career as an actor, performing leading roles for the RSC, the National Theatre and Cheek by Jowl.She lives with her family in Gloucestershire.