Published on 25th May 2018. My thanks to the author for the review copy and Rachel of Rachel's Random Resources for inviting me on to the blog tour. 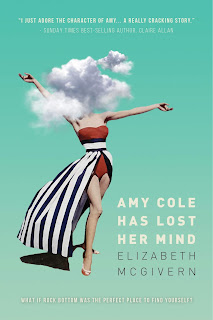 Amy Cole is a stay-at-home mum and a woman on the edge.


After a very public breakdown and failed suicide attempt, Amy finds herself trying to make it through her everyday life as a high-functioning zombie.
Elle De Bruyn is a force of nature ready to shake Amy back to life whether she likes it or not.
After a fortuitous meeting, the two embark on a journey together which will change them both and help them find out exactly what they’re capable of when rock bottom is just the beginning.

I was thrilled to be invited on to this blog tour as after taking part in the cover reveal I was desperately wanting to read this book and I can safely and assuredly say that I was not disappointed.

Elizabeth McGivern is a gifted writer that has taken a serious subject matter and managed to mix it in with dashes of wonderful humour without detracting from the difficulties that the characters encounter.

Amy Cole has been through through something traumatic. She is depressed and at a rock bottom, struggling to find her way back up. An encounter with Elle De Bruyn is a game changer. Elle is different from Amy in so many ways but still a friendship begins that could change both of their lives. Much hilarity ensues as the antics of the pair are laid out in all of their comedic glory for the reader.

I loved the characters in this novel, complex and well rounded they were relatable and entertaining in equal measure. They could be ourselves or people that we know.

Elizabeth McGivern has written a story with mass appeal that will strike a cord with women everywhere. Depression exists and should be talked about. This story is proof that we can still exist with these mental health issues and tackle life with humour and see the world with beauty and grace.

An exceptionally accomplished read that tackles many issues of today including miscarriage, depression and suicide and one that brings a touch of comedy to brighten the days whilst never dimming the seriousness of the issues people go through.

A wonderful read that I can't help but recommend.

About the Author:
Elizabeth McGivern is a former journalist turned hostage-in-her-own-home surrounded by three men and a horrible dog named Dougal.
In an effort to keep her sanity she decided to write a parenting blog after the birth of her first son so she can pinpoint the exact moment she failed as a mother.
In an unexpected turn of events, the blog helped her to find a voice and connect with parents in similar situations; namely those who were struggling with mental health issues and parenting. It was because of this encouragement – and wanting to avoid her children as much as possible – her debut novel, Amy Cole has lost her mind, was born.
Elizabeth lives in Northern Ireland although wishes she could relocate to Iceland on a daily basis. To witness her regular failings as a parent you can find her on:
www.mayhemandbeyond.com

Please do have a look at some of the other stops along the tour. 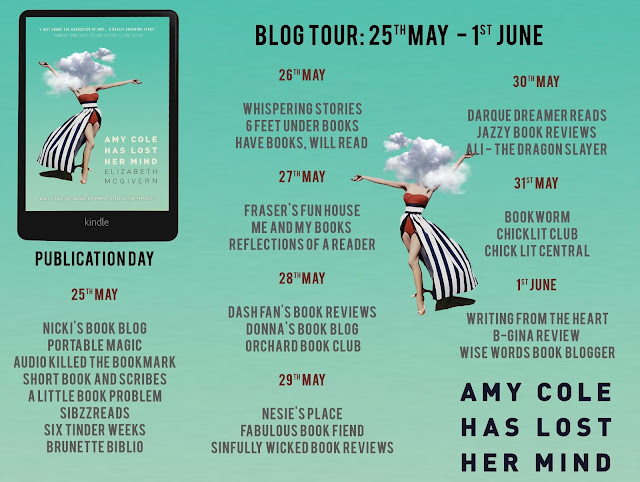