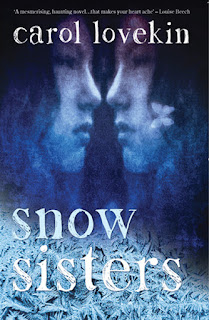 Published on 21st September 2017 by Honno Welsh Women's Press. My thanks to the Author and the Publisher for the review copy and having me on the blog tour.

Two sisters, their grandmother's old house and Angharad... the girl who cannot leave

Meredith discovers a dusty sewing box in a disused attic. Once open the box releases the ghost of Angharad, a Victorian child-woman with a horrific secret she must share. Angharad slowly reveals her story to Meredith who fails to convince her sister of the visitations until Verity sees Angharad for herself on the eve of an April snowstorm.


Forced by her flighty mother to abandon Gull House for London, Meredith struggles to settle, still haunted by Angharad and her little red flannel hearts. This time, Verity is not sure she will be able to save her... 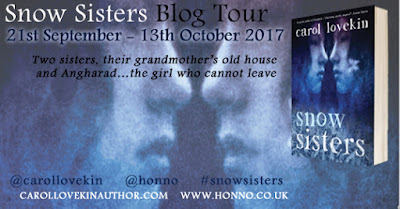 Snow Sisters is the second novel written by Carol Lovekin, her first Ghostbird was published last year. I haven't read that one yet, and I must own up slightly and say that I am not usually the biggest fan of stories that contain ghosts, but I adored this book in so many ways, it was actually quite transformative.

Snow Sisters is a book that defies genres, nestled in its own niche, if pushed I would say it is literary fiction, with magical realism and feminism. It really is a wonderful, absorbing and unique read.

This is the story of Sisters, Meredith and Verity. It is also the story of Angharad, a ghost of a girl who lived at Gull House 100 years prior. She has a sad story to tell and it seems that Meredith is the one to hear it. Allegra is the girls Mother, who is dysfunctional at best and seems distant and detached. It seems that she is incapable of showing her children the love and nurturing that they deserve.

Nonetheless the girls have ambitions, they long to be independent. Relying on a man is not really in their plans. They have a wonderful relationship with their Nain, who seems to keep an eye on the girls from a distance despairing of her daughter Allegra's behaviour.

Many themes are encompassed within the pages of this story; feminism, the mother/daughter relationship, hope, magic, love, sisterly bonds, favouritism.

I was unprepared for the exquisiteness of the authors writing, the glorious prose and the poetic and lyrical nature of the wording. Colours and places, nature and sound, voices and landscapes, past and present. All of these things danced off of every page, a kaleidoscope of magic.

The wonderful almost female only cast of characters, were believable, genuine and warm. Although not all likeable all of the time, they were all wonderfully written and envisaged by the author in great detail. I had a very vivid picture in mind of them all as I was reading.

I have no doubt in my mind that this author is an artist, an artist with great insight. One that shows and doesn't tell. An artist that uses her literary palette with a deft touch that leads the reader on the journey, invites them to sit in the gardens of Gull House for a while and then lets them form their own conclusions as the landscape unfolds before them.  A writer that isn't afraid to use the light and shade in this multi faceted and phenomenal story.

I could recommend this one to every single person and I am sure they would love it as much as I did.

About the Author:
Carol is a writer, feminist and flâneuse. Her home is in beautiful West Wales, a place whose legends and landscape inform her writing. She writes contemporary fiction threaded with elements of magic.Her second book, SNOW SISTERS, was published on 21 September, 2017 by Honno, the Welsh Women's Press. It has been chosen by the Welsh Books Council as their October Book of the Month (for independent shops.)GHOSTBIRD, her first novel, was published in March 2016. The book was chosen as Waterstones Wales and Welsh Independent Bookshops 'Book Of The Month' for April 2016. It was longlisted for the Guardian 'Not the Booker' prize 2016 and nominated for the Guardian Readers' Book of the Year 2016.

Please do have a look at the other stops along the blog tour. 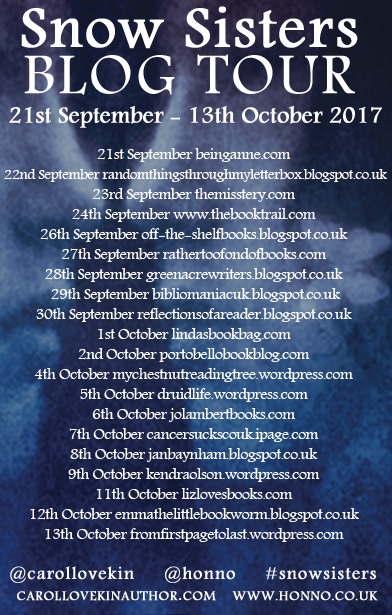